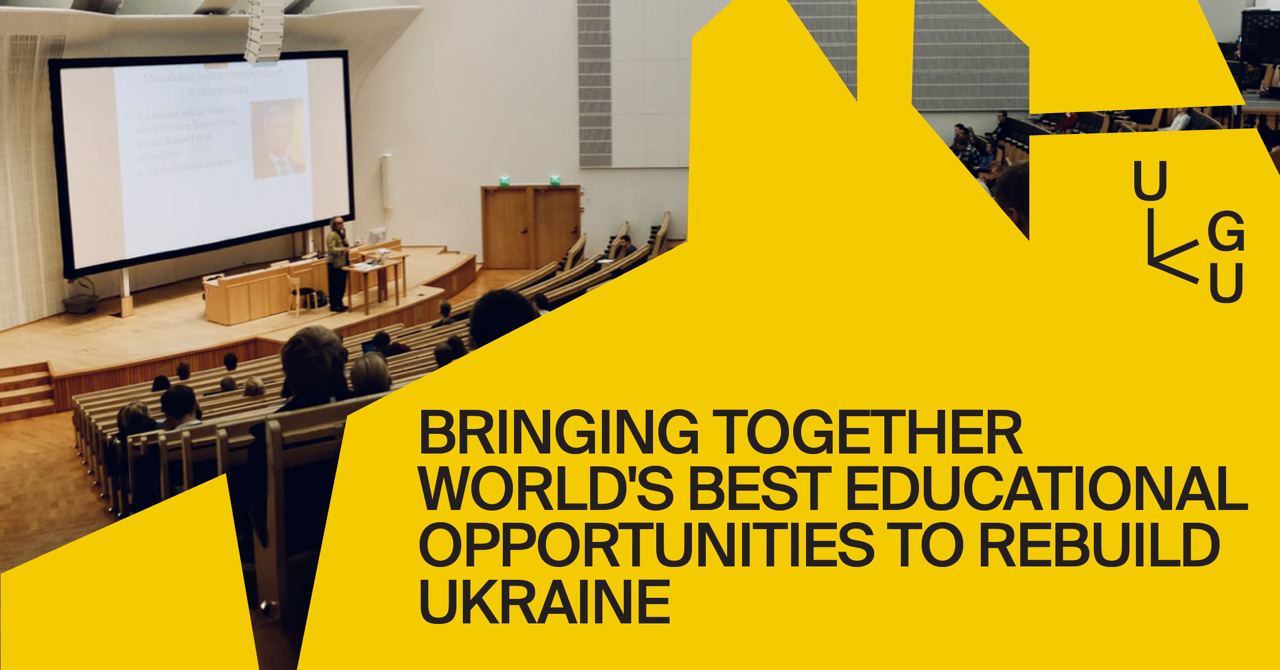 Ukrainian Global University (UGU) aims to bring together the world's best educational institutions to support Ukrainians and give them opportunities for high-quality education and research to rebuild their country. The initiative was launched in partnership with the Office of the President of Ukraine by the consortium of leading Ukrainian educational institutions and organizations, i.e. Kyiv School of Economics, Ukraine Global Scholars, Ukrainian Catholic University, Ukrainian Emerging Leaders Program at Stanford University, Professional Government Association of Ukraine, SET University, and Kyiv Academic University. The initiative is endorsed by the Ministry of Education and Science of Ukraine and the Embassy of Ukraine in the US.

Kyiv, Ukraine – March 29, 2022 – Ukrainian government, educational institutions, and civil society organizations jointly launch Ukrainian Global University (UGU). It is a global network that brings together the world's best educational institutions. This non-profit initiative aims to connect Ukrainian students, fellows, scientists, and tutors with educational institutions worldwide, newly offered  scholarships, fellowships, and postdoc programs. The platform ensures that the displaced students, scholars, and fellows are not abandoned; it also supports those who are willing to study/do research abroad in order to come back and rebuild Ukraine. The main goal of the UGU initiative is to overcome the devastating consequences of Russia’s aggressive war and jointly with the international intellectual community develop ideas and practices to build a new Ukraine.

"Integration of Ukraine in the world educational space was and still stays one of the key priorities of our country. Now Ukrainian scholars, students, tutors, and researchers, suffering from Russian aggression, need support!" By investing in educational potential in collaboration with the leading universities of Ukraine and worldwide, we invest in our future! The establishment of the Ukrainian Global University is a call to the educational community of the whole world to support Ukrainian scholars, students, researchers in getting a quality education. These people will return to Ukraine to rebuild it after the war, with a world-class education behind them. " - said Olga Budnyk, Advisor to the President of Ukraine on the Fund of the President of Ukraine for Support of Education, Science and Sports.

In the first phase, the UGU focuses on establishing personal and institutional partnerships with schools, higher educational institutions, and research centers worldwide. UGU is looking for partnerships that will create stimulating intellectual environments for a medium to long term. The initiative will engage with foundations and universities that can sponsor students, scholars, researchers individually and as groups. The details and conditions are agreed with each partner institution on a case by case basis, but all partners are encouraged to sign an open memorandum with UGU that defines the shared values and principles. Please join the effort to build Ukrainian academic and intellectual sovereignty by expressing an interest in partnership at  https://uglobal.university/.

“We hope that UGU, based on the joint efforts of leading Ukrainian and foreign universities, will help preserve Ukraine's intellectual potential during the war, increase its research skills at the best European and American universities, and create new international links and projects that  will form the conditions for young Ukrainian scholars to return to Ukraine after the war,” said Vitaliy Shadura, Vice Director for Science and Education of Kyiv Academic University, one of the initiators of UGU.

Stanford, Yale, Harvard and other leading universities have already supported the initiative and committed specific resources and programming, such as fellowships for visits and funding for joint activities. “Stanford recognized the importance of creating new educational programs for Ukrainians six years ago, when we created The Ukrainian Emerging Leaders Program. The alumni of this program have already made significant changes to improve Ukraine. I endorse UGU and appeal to all other universities in the world to support Ukrainian students and academics,” said Michael McFaul, Professor of Political Science at Stanford University, Director of Freeman Spogli Institute for International Studies.

“University Paris 1 Panthéon-Sorbonne has a long tradition of solidarity with scholars and students in exile. It is particularly important to us that UGU is initiated and led by Ukrainian scholars who are currently fighting not only for the sovereignty of their country, but also for our common European values. We will continue our support after the end of the war, when Ukrainians will go back to rebuild their country,” said Christine Neau-Leduc, President of the University Paris 1 Panthéon-Sorbonne.

To maximize the effort of the UGU initiative, the team is building a network of volunteers. Alumni and university representatives from all over the world are welcome to join UGU and help connect more educational institutions to the network. They can become UGU ambassadors at their universities or reach out to an administration at any institution worldwide to initiate the process of their partnership with UGU.

If Ukrainian students/scientists are willing to be UGU participants, they can follow a  simplified application process on the UGU website. After being accepted, the UGU participants will go through a fully guided application process to any educational institution listed on the platform to maximize their admission chances. UGU is also partnering with a language-learning app DuoLingo to enable Ukrainians to take English tests and get certificates free of charge no matter where they are. The initiative requires all students to return to Ukraine after finishing their education/research to help rebuild the country post war.

While the war is still going on in Ukraine, Ukrainian universities and other educational institutions are already taking care of ways to rebuild the country as fast as possible when the victory comes. Ukrainian participants of the initiative will get access to high-quality education and research abroad and will be able to apply their cutting-edge knowledge and skills in their home country. In the future, the UGU team plans to launch internships and programs in Ukraine that will allow participants to reintegrate quickly and contribute to rebuilding Ukraine once they are back.